N.C. Officials and Biden Administration: People Are Dying Without Medicare for All! Pass the Bill! 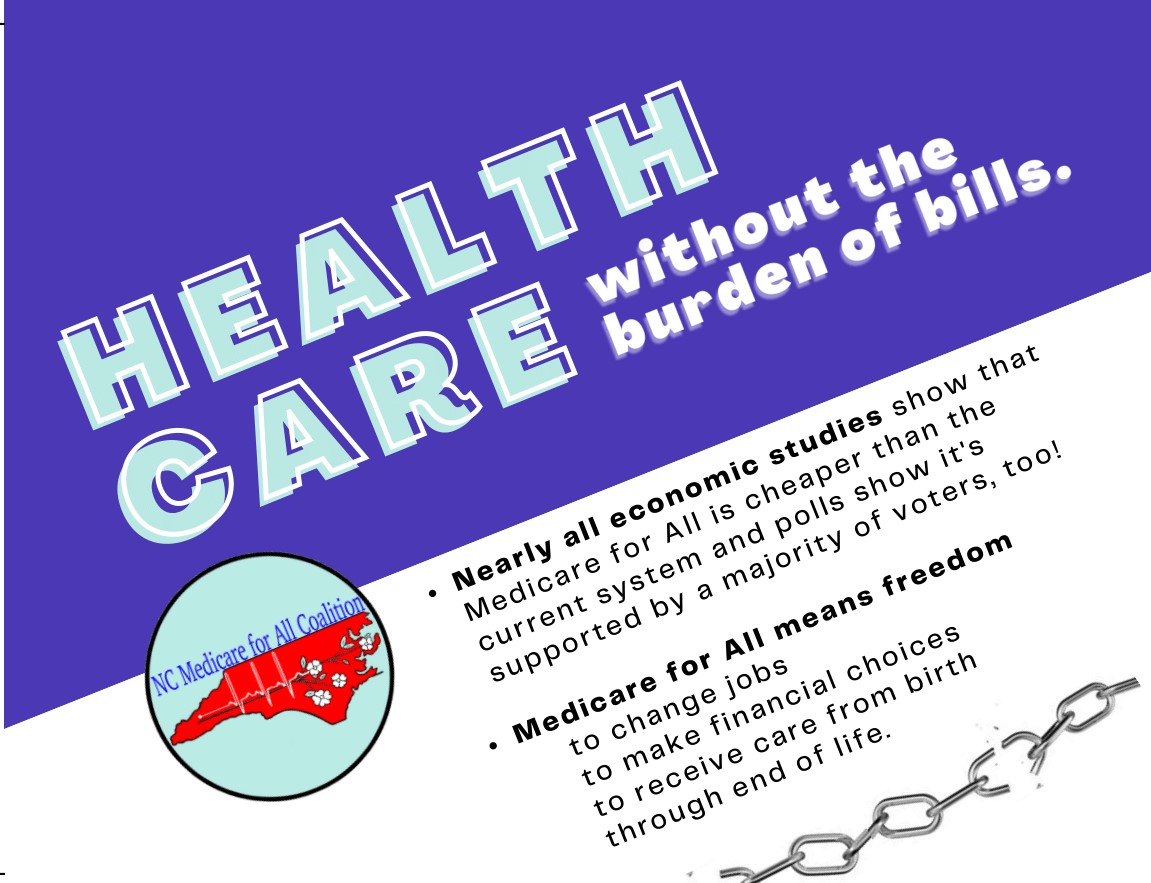 People are continuing to get sick, die, and face financial ruin from COVID-19 raging out of control. Our jobs and insurance plans are not secure, if we have them. We must, as a country, find policy solutions that address our interconnected problems, and we believe that starts by passing Improved Medicare For All. Therefore we are urging the entire N.C. Congressional delegation as well as the Biden administration to support the passage and implementation of the H.R. 1976 - The Medicare For All Act of 2021 and then Senate companion bill when it is re-introduced.

We must admit that even before COVID-19, our country was facing a healthcare crisis. We continue to spend almost double what other industrialized countries spend per capita on healthcare, and yet more than 87 million of our people are either uninsured or underinsured, meaning they can’t afford to use the insurance they have.

In addition, our nation’s health outcomes in areas like life expectancy and maternal and infant mortality rates continue to be among the worst in the developed world. The Affordable Care Act and our employer-based healthcare system have failed us during this public health crisis and no amount of tweaking will make this profit-driven system cover everyone and control costs. A public option will just be another layer in our costly, inefficient multi-payer system.

This pandemic has produced immense economic strain, a climbing death toll, and rapid loss of employer-based insurance (for those fortunate to have it). Within this unjust system, Black, Latinx, Indigenous, and other marginalized people are forced to bear the harshest impacts. Dying of COVID-19 at higher rates, people of color also account for 54 percent of North Carolina’s uninsured while making up only 37 percent of the population. Furthermore, an estimated 257,000 North Carolinians lost their health insurance and jobs during the first six months of the COVID-19 pandemic, increasing our state’s uninsured rate to 20 percent for people under age 65, one of the highest uninsured rates in the nation.

This “crossroads” moment demands we imagine a new future where healthcare is a human right for all of us - youth, seniors, low-wage workers, disabled individuals, justice-system involved folk, domestic violence and sexual assault survivors, veterans, the LGBTQIA community, the undocumented community, people who need reproductive health services, and more. We must join together in an intersectional movement that shines light on the interconnected injustices we face and builds power to overcome them. We must reject platitudes and half-measures as we work to achieve true health justice and equity with a universal, single-payer healthcare system that eliminates financial barriers to seeking care.

Improved Medicare for All not only means freedom from the financial stress of medical bills, it also means a country that is safer, healthier and more productive because every person is covered. Moreover, a single-payer, universal health-care system is estimated to lead to a 13 percent savings in national healthcare expenditure, equivalent to more than $450 billion annually, according to a recent study by Yale University. Additionally, researchers estimated that ensuring healthcare access for all Americans with a universal system would save more than 68,000 lives each year compared with the status quo.

Not only is a universal, single-payer system the right and most economically feasible policy, it’s also clearly more popular among Americans than the current system. According to a November 2020 Fox News poll, 72 percent of voters favor a universal, government-administered health care plan. A CNN exit poll of N.C. voters in the 2020 Democratic primary found majority support for replacing private insurance with a “government” plan. Overall, Republicans and Democrats have tended to favor Medicare For All with consistency.

The COVID-19 pandemic has made the need for a healthcare system that values people over profits more urgent than ever before. Therefore, we the undersigned urge the Biden administration to support passage of Medicare For All.  We urge the entire N.C. Congressional delegation to sign on as co-sponsors of the new bills - H.R. 1976 in the House and the companion bill when introduced in the Senate, so the U.S. may join the rest of the developed world in making healthcare a human right and not a privilege.

The North Carolina Medicare for All Coalition