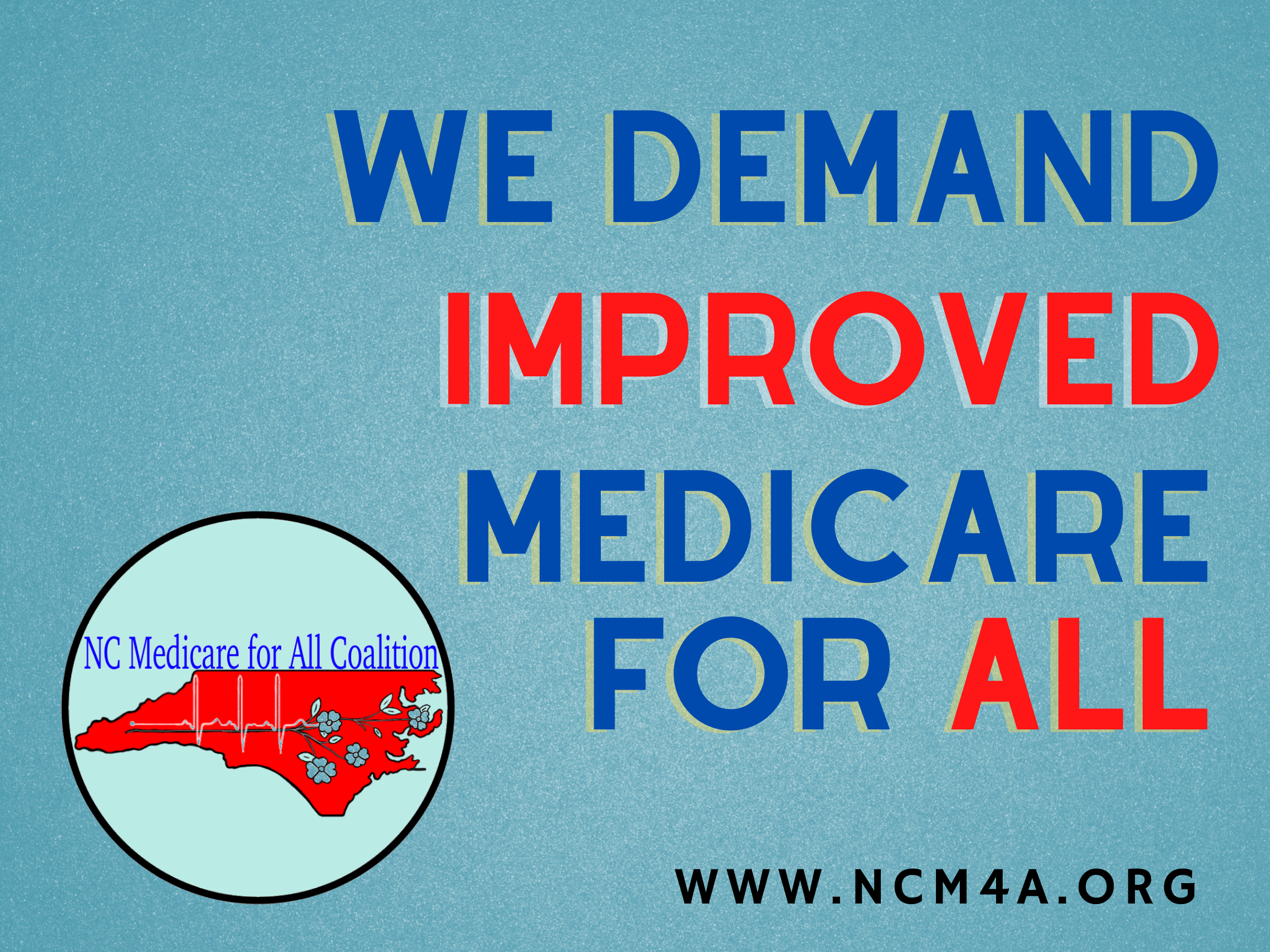 Even with the resolution of the 2020 election, we remain in the midst of a dire healthcare crisis in North Carolina and the country as a whole. The surging global pandemic is compounding the existing healthcare disparities in North Carolina and beyond. The North Carolina Medicare for All Coalition (NCM4A) refuses to accept senseless deaths and a “return to normal" when normal means over 45,000 Americans dying annually because they cannot afford healthcare.

Despite the notion of a democratic government, it’s clear that the economic interests of the private insurance and health care industries are superseding the will of the American people. As a statewide coalition representing thousands of supporters, NCM4A is committed to challenging duplicitous politicians who serve donors instead of constituents, hiding behind platitudes like promising “access” to healthcare or saying “healthcare is a right” without policy or votes that match their rhetoric. In districts where incumbents are blocking progress on a national healthcare system, this coalition will find and support new unbought and unbossed candidates who will fight for universal healthcare to meet the needs of every person.

We will not stand idly by while our country’s unaffordable private health insurance system degrades and bankrupts people and their families. Americans owed $88 billion in medical debt in 2018, and nearly half (45%) of people surveyed said they feared a medical event would bankrupt them. Medical bills are the leading cause of personal bankruptcy despite the Affordable Care Act.

Within this unjust system, Black, Latinx, Indigenous, and other marginalized people are forced to bear the harshest impacts. Dying of Covid at higher rates, people of color also account for 54 percent of North Carolina’s uninsured while making up only 37 percent of the population. Health justice is racial justice.

Furthermore, an estimated 257,000 North Carolinians lost their health insurance and jobs during the first six months of the Covid-19 pandemic. With more than 1.1 million N.C. residents already uninsured at the start of the pandemic, recent job losses have increased our state’s uninsured rate to 20 percent for people under age 65. Only seven states have higher uninsured rates.

Nationally, nearly 90 million Americans are uninsured or underinsured, and millions of people with employer-based health insurance are burdened by ever-increasing premiums, deductibles, and co-payments, often making their coverage too expensive to use. Introducing a public option will not resolve the fundamental problems of commodified healthcare that enriches private insurance companies, large hospital systems, and pharmaceutical companies at the expense of patients.

Fortunately, Improved Medicare for All is a comprehensive solution and studies show it will cost less in the long term. Medicare for All is also a winning issue. In poll after poll, the majority of Americans have declared their preference for a universal, government-administered healthcare system. A 2020 Morning Consult poll pegs support for Medicare for All at 55 percent of voters nationally, while a 2020 Fox News exit poll found support as high as 72 percent of all voters. 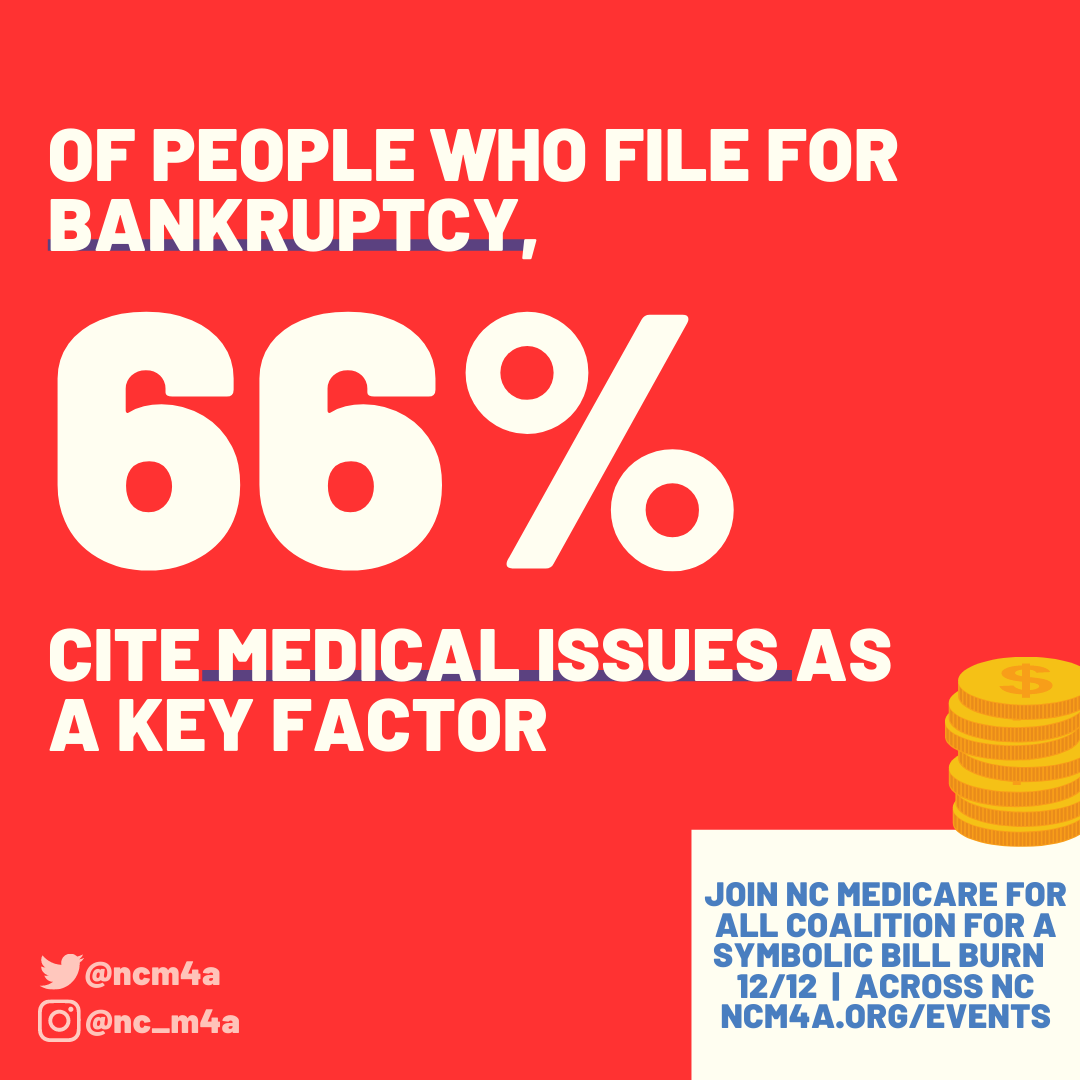 This moment in history demands systemic change. Expanded and Improved Medicare for All, a single-payer healthcare system, is within our grasp. To work toward this end, NCM4A will hold public events to reassert healthcare as a human right and mark International Human Rights Day. Events will include a December 10 press conference with multiple speakers in Raleigh and “Bill Burn” Bonfires December 12 across North Carolina, which will observe Covid-19 safety precautions.

As some of us are forced to make hard choices about the coverage we can afford during open enrollment, too many others remain totally locked out. We believe we all deserve better than a corrupt, profit-driven health system and an administration that seeks to uphold the status quo.

Despite the fear-mongering, we believe Medicare for All represents true freedom -- to change jobs, start a business, ensure the health of loved ones, and live a life free from medical debt. In this critical moment at the dawn of the Biden-Harris administration, the North Carolina Medicare for All Coalition won’t relent until the dignity of every individual is recognized by providing truly universal healthcare through Improved Medicare for All.