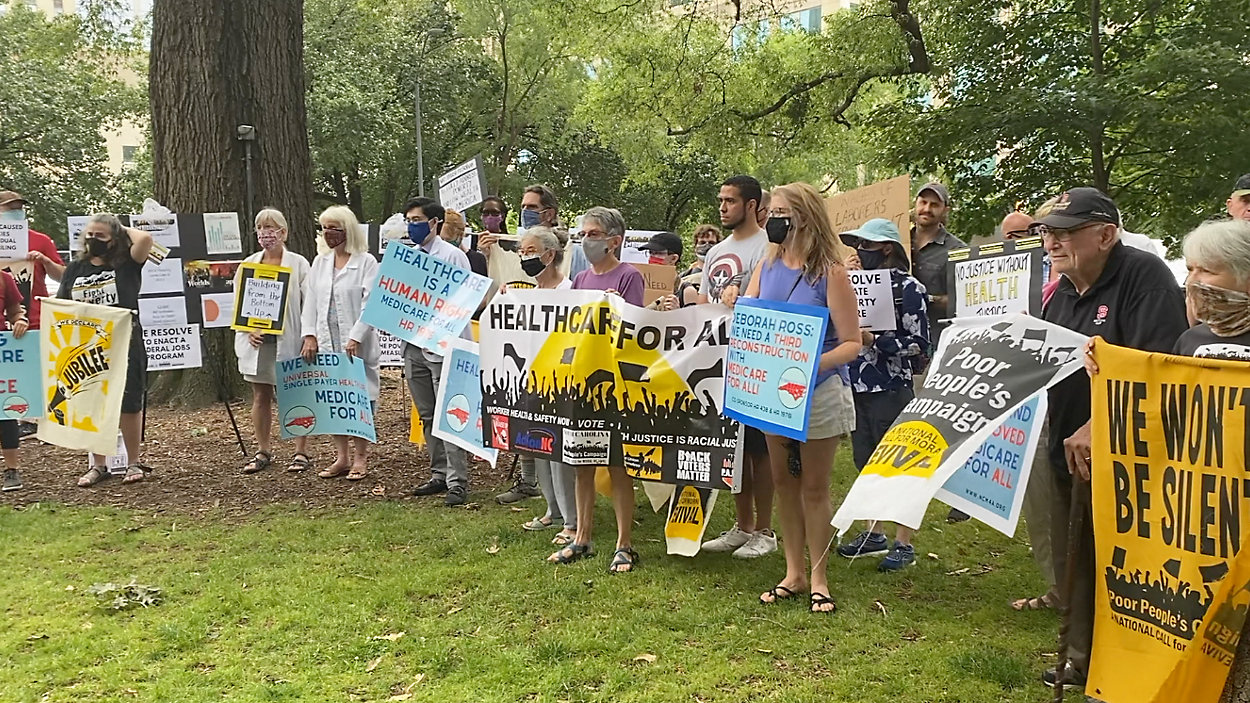 Activists and supporters from progressive groups held a rally in downtown Raleigh Monday, demanding that North Carolina’s members of the U.S. House sign onto a resolution calling on Congress to enact a series of progressive priorities aimed at cutting poverty nationwide.

The crowd of approximately 70 people gathered at Nash Square around noon, where a handful of speakers talked about the need to urgently address issues like stagnating wages, high health care costs and systemic racism. In front of a backdrop of supporters holding signs declaring “healthcare is a human right” and “denying healthcare is violence,” the speakers called on North Carolina’s congressional delegation to support their movement for a “Third Reconstruction” to uplift impoverished Americans.

The civil rights movement is sometimes referred to as a second Reconstruction, with parallels to the original post-slavery Reconstruction in which the federal government tried to force the South to provide equality for Black Americans.

“Poverty and low wealth is a policy choice,” said Ana Ilarraza-Blackburn, one of the chairs of the North Carolina Poor People’s Campaign. “And when our representatives do not speak in policy about the 140 million poor and low-wage people suffering, and keeping them [marginalized], it is time that we say, ‘Basta.’ ‘Enough.’”

Other speakers invoked their personal experiences with struggling to pay for the high cost of health care. Pashondra James of Fuquay-Varina said she suffers from a rare disorder that affects her joints and heart, and which is treated by medication that costs her $786 per month.

“Who can afford that? We need Medicare for All,” she said. “Everybody has the right to see the doctors that we need.”

The Rev. William Barber II of Goldsboro, who led “Moral Monday” protests at the legislature in Raleigh, also co-founded the national Poor People’s Campaign — a relaunching of a project led by the Rev. Martin Luther King Jr. just before his death, The News & Observer previously reported.

Later this month, the national Poor People’s Campaign will hold a follow-up rally in Raleigh that will feature Barber. That gathering, at Halifax Mall on June 21 at 5:30 p.m., will launch a yearlong campaign leading up to a march on Washington in June 2022.

After hearing from a few other speakers on Monday, the group of activists marched to the nearby office of Rep. Deborah Ross, a first-term Democrat representing Wake County, to urge her to support the resolution. H. Res. 438 was introduced by Rep. Barbara Lee, a California Democrat, late last month.

The wide-ranging resolution calls on Congress to implement a federal jobs guarantee and raise the federal minimum wage “to a living wage,” enact universal health care, and provide borrowers with relief from student, household, and other forms of debt. It currently has 30 cosponsors, just one of whom, Rep. Alma Adams, a Democrat from Charlotte, is from North Carolina.